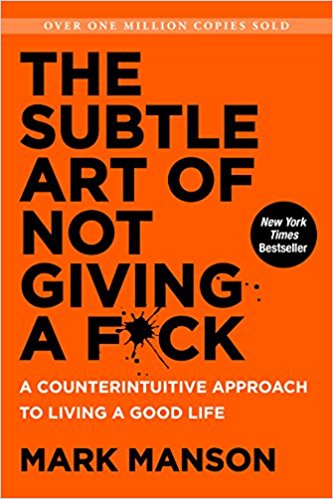 A good starter book for those coming to the world of non-fiction reading for self betterment. I didn’t find this one to say anything novel compared to all the other books I have read below, but I did appreciative the humour used throughout. It is a light read and has some solid concepts that would be beneficial to people who haven’t read much from the same genre.

Being open with your insecurities paradoxically makes you more confident and charismatic around others. The pain of honest confrontation is what generates the greatest trust and respect in your relationships. Suffer through your fears and anxieties is what allows you to build courage and perseverance.

Not giving a fuck does not being indifferent; it means being conformable with being different.
Let’s be clear. There’s absolutely nothing admirable or confident about indifference. People who are indifferent are lame and scared. They’re couch potatoes and internet trolls.

Happiness comes from solving problems.
True happiness occurs only when you find the problems you enjoy having and enjoy solving.

Our lives today are filled with information from the extremes of the bell curve of human existence, because in the media business thats what get eyeballs, and eyeballs bring dollars. That’s the bottom line. Yet the vast majority of life resides in the humdrum middle. The vast majority of life is UNextrordinary, indeed quite average.

Being “average” has become the new standard of failure.
When a culture’s standard of success is to “be extraordinary” it then becomes better to be at the extreme low end of the bell curve than to be in the middle, because at least there you’re still special and deserve attention. Many people choose this strategy: to prove to everyone that they are the most miserable, or the most oppressed, or the most victimized.
A lot of people are afraid to accept mediocrity because they believe that if they accept it, they’ll never achieve anything, never improve, and that their life won’t matter.
Once you accept the premise that a life is worthwhile only if it is truly notable and great, then you basically accept the fact that most of the human population (including yourself) sucks and is worthless. And this mindset can quickly turn dangerous, to both yourself and others.

The vast majority of your life will be boring and not noteworthy, and that’s okay.

You will have a growing appreciation for life’s basic experiences: the pleasures of simple friendship, creating something, helping a person in need, reading a good book, laughing with someone you care about. Sounds boring, doesn’t it? That’s because these things are ordinary. But maybe the’re ordinary for a reason: because they are what actually matters.

If you want to change how you see your problems, you have to change what you value and/or how you measure failure/success.

Certainty is the enemy of growth. Nothing is for certain until it has already happened.

Our beliefs are malleable, and our memories are horribly unreliable.

The more you embrace being uncertain and not knowing, the more comfortable you will feel in knowing what you don’t know.

If someone is better than you at something, then its likely because she has failed at it more than you have. If someone is worse than you, it’s liekly because he hasn’t bene through all of the painful learning experiences you have.

For many years, the thought of speaking to a stranger – especially if that stranger happened to be particularly attractive/interesting/popular/smart – felt impossible to me. “How? Do you just walk up and talk to a person? How can somebody do that?”
I had all sorts of screwed uo beliefs about this, like that you weren’t allowed to speak to someone unless you had some particular reason to, or that women would think I was a creepy rapist if I so much as said “Hello.” The problem was that my emotions defined my reality. Because it FELT like people didn’t want to talk to me, I came to believe that people didn’t want to talk to me.

“If you’re stuck on a problem, don’t sit there and think about it; just start working on it. Even if you don’t know what you’re doing, the simple act of working on it will eventually cause the right ideas to show up in your head”

Action isn’t just the effect of motivation; it’s also the cause of it.

The avoidance of rejection (both giving it and receiving it) is often sold to us as a way to make ourselves feel better. But avoiding rejection gives us short-term pleasure by making us rudderless and directionless in the long term.

Rejection is an inherent and necessary part of maintaining our values, and therefore our identity. We are defined by what we choose to reject. And if we reject nothing (perhaps in fear of being rejected by something ourselves), we essentially have no identity at all.

No-one trusts a yes-man. If Disappointment Panda were here ,he’d tell you that the pain in our relationship is necessary to cement out trust in each other and produce greater intimacy.

When trust is destroyed, it can be rebuilt only if the following two steps happen.
1) the trust-breaker admits the true values that cause the breach and owns up to them.
2) the trust-breaker builds a solid track record of behaviour over time.

Once we become comfortable with the fact of our own death – the root terror, the underlying anxiety motivating all of life’s frivolous ambitions – we can choose our values more freely, unrestrained by the illogical quest for immortality, and freed from dangerous dogmatic views.

A man who lives fully is prepared to die at any time.