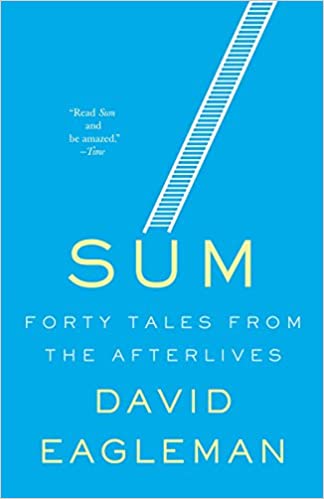 Very interesting format, with very interesting out-of-the-box stories. Its a collection of short stories about what happens after you die. A great book to pick up for 5 minutes to rad and then do some introspection. Most (not all) of the chapters really brings up opportunity for deep thought and personal growth. It’s funny how stories about death can help you learn how to be alive.

There are three deaths.
The first is when the body ceases to function.
The second is when the body is consigned to the grave.
The third is that moment, sometime in the future, when your name is spoken for the last time.
Many people leave just as their loved ones arrive, since the loved ones were the only ones doing the remembering.
He waits with aching heart for his statues to fall.
And that is the curse of this room: since we live in the heads of those who remember us, we lose control of our lives and become who they want us to be.

What we call God is actually a married couple. When they decided to create humans in their own image, they compromised and manufactured approximately equal numbers of both genders.
Certain nights when they’re feeling liberal, each creates a member of the opposite sex, just to see what it’s like.

(“What is answer?”)
They decided it might be easier to build supercomputing machines devoted to finding the answers.
So they invested the labor of tens of generations to engineer these.
We are their machines.
This seemed a clever strategy to the elders of their community.
However, they overlooked a problem: to build a machine smarter than you, it has to be more complex than you – and the ability to understand the machine begins to slip away.

Your fantasies have cursed your realities.

The end of death is the death of motivation.
Too much life, it turns out, is the opiate of the masses.
There is a noticeable decline in accomplishment.
People take more naps. There’s no great rush.

Your Creators are talented at just that: creation – but they’re not involved with the observation and judgment of our actions, as we had previously supposed them to be.
The Creators watch none of the details as our lives unfold.
They could not care less.

When you die, you are grieved by all the atoms of which you were composed.
They hung together for years, whether in sheets of skin or communities of spleen.
With your death they do not die. Instead, they part ways, moving off in their separate directions, mourning the loss of a special time they shared together, haunted by the feeling that they were once playing parts in something larger than themselves, something that had its own life, something they can hardly put a finger on.

There is bitter competition among the gods.
Jealous rivalries abound because the stakes are so low; the gods are not large and powerful and they know it.
So they try their best to stand out and to be heard.
Some of the humans reach out to make cell phone contact with a single friend out of the innumerable hordes.
And gazing out over the steering wheel, each human feels the intensities of joy and grief as though his were the only real examples in the world.
Among all the creatures of creation, the gods favor us: we are the only ones who can empathize with their problems.

Genes unwrap, proteins blossom, synapses rearrange.
All this is well below your awareness – you are merely carrying the brainbox with no acquaintance with what happens inside it.

In the afterlife you can enjoy all possibilities at once, living multiple lives in parallel.
“This,” you tell the angel, “is too much work.”
“Perhaps we could warm you up with a simpler situation,” he considers.
“How would you like to be in a closed room, one-on-one with your lover?”
And then you are here.
You are simultaneously engaged in her conversation and thinking about something else;
she both gives herself to you and does not give herself to you;
you find her objectionable and you deeply love her;
she worships you and wonders what she might have missed with someone else.
“Thank you,” you tell the angel. “This I’m used to.”

Although we credit God with designing man, it turns out He’s not sufficiently skilled to have done so. In point of fact, He unintentionally knocked over the first domino.

The Rewarders originally thought to offer it as a gift, but the Punishers quickly decided they could leverage it as a kind of affliction, drying up life’s pleasures by revealing their bloodlessly mechanical nature.

Being let into the secrets behind the scenes has little effect on our experience.
The secret codes of life – whether presented as a gift or a burden – go totally unappreciated.

In the afterlife you are judged not against other people, but against yourself.
Specifically, you are judged against what you could have been.
So the afterworld is much like the present world, but it now includes all the yous that could have been.
They made smarter choices, worked harder, invested the extra effort into pushing on closed doors.
These doors eventually broke open for them and allowed their lives to splash out in colorful new directions.
Such success cannot be explained away by a better genetic hand; instead, they played your cards better.
In their parallel lives, they made better decisions, avoided moral lapses, did not give up on love so easily.
They worked harder than you did to correct their mistakes and apologized more often.
You have little sympathy for these less significant yous and more than a little haughtiness about their indolence.
“If you had quit watching TV and gotten off the couch you wouldn’t be in this situation,” you tell them, when you bother to interact with them at all.
But the better yous are always in your face in the afterlife.
In the bookstore you’ll see one of them arm in arm with the affectionate woman whom you let slip away.
Another you is browsing the shelves, running his fingers over the book he actually finished writing.
And look at this one jogging past outside: he’s got a much better body than yours, thanks to a consistency at the gym that you never kept up.
The more you fall short of your potential, the more of these annoying selves you are forced to deal with.

True equality.
The Communists are baffled and irritated, because they have finally achieved their perfect society, but only by the help of a God in whom they don’t want to believe.
The meritocrats are abashed that they’re stuck for eternity in an incentiveless system with a bunch of pinkos.
The conservatives have no penniless to disparage.
The liberals have no downtrodden to promote.

(Heaven is only people you met:)
The missing crowds make you lonely.
You begin to complain about all the people you could be meeting.
But no one listens or sympathizes with you, because this is precisely what you chose when you were alive.

Perhaps you were tortured by the enormity of the decisions and responsibilities that surrounded you, and now there’s only one thing you yearn for: simplicity.
That’s permissible.
So for the next round, you choose to be a horse. You covet the bliss of that simple life.
Suddenly, for just a moment, you are aware of the problem you overlooked.
The more you become a horse, the more you forget the original wish.
You forget what it was like to be a human wondering what it was like to be a horse.
You cannot appreciate the destination without knowing the starting point.
You cannot revel in the simplicity unless you remember the alternatives.
And that’s not the worst of your revelation.
You realize that the next time you return here, with your thick horse brain, you won’t have the capacity to ask to become a human again.
You won’t understand what a human is.
Your choice to slide down the intelligence ladder is irreversible.
And just before you lose your final human faculties, you painfully ponder what magnificent extraterrestrial creature, enthralled with the idea of finding a simpler life, chose in the last round to become a human.

You were much better at seeing the truth about others than you ever were at seeing yourself.
So you navigated your life with the help of others who held up mirrors for you.
People praised your good qualities and criticized your bad habits, and these perspectives – often surprising to you – helped you to guide your life.

God said, “The respect I once commanded was caving. So I came up here for the same reason doctors wear uniforms of long white coats. They don’t do it for their benefit, but for yours.”