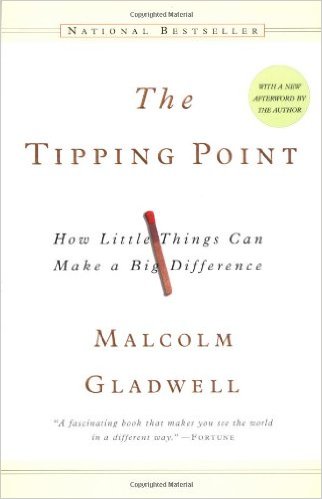 The Tipping Point – by Malcolm Gladwell

There is a point in time in which an idea or a product “tips” from the small time to the big time. Many case studies of what can cause an idea to blow up at an exponential rate. This is for the entrepreneur/marketer that wants their product or service to be seen by millions of people and it explains the way of thinking to do it.

The Tipping Point is the biography of an idea, and the idea is very simple. It is that the best way to understand the emergence of fashion trends, the ebb and flow of crime waves, or, for that matter, the transformation of unknown books into bestsellers, or the rise of teenage smoking, or the phenomena of word of mouth, or any number of the other mysterious changes that mark everyday life is to think of them as epidemics.
Ideas and products and messages and behaviors spread just like virus’ do.

Principles of epidemics:
– contagiousness
– the fact that little causes can have big effects,
– that change happens not gradually but at one dramatic moment.

Agents of change
1. Law of the Few
2. Stickiness Factor
3. Power of Context

Epidemics tip because of the extraordinary efforts of a few select carriers.

Stickiness means that a message makes an impact. You can’t get it out of your head. It sticks in your memory.
The Stickiness Factor says that there are specific ways of making a contagious message memorable; there are relatively simple changes in the presentation and structuring of information that can make a big difference in how much of an impact it makes.

Epidemics are strongly influenced by their situation — by the circumstances and conditions and particulars of the environments in which they operate.

The bystander problem. They staged emergencies of one kind or another in different situations in order to see who would come and help. What they found, surprisingly, was that the one factor above all else that predicted helping behavior was how many witnesses there were to the event.

The Power of Context says that human beings are a lot more sensitive to their environment than they may seem.

It is safe to say that word of mouth is — even in this age of mass communications and multimillion-dollar advertising campaigns — still the most important form of human communication.

The success of any kind of social epidemic is heavily dependent on the involvement of people with a particular and rare set of social gifts.

These people who link us up with the world, who introduce us to our social circles — these people on whom we rely more heavily than we realize — are Connectors, people with a special gift for bringing the world together. They are the kinds of people who know everyone.
Sprinkled among every walk of life, in other words, are a handful of people with a truly extraordinary knack of making friends and acquaintances. They are Connectors.

In the case of Connectors, their ability to span many different worlds is a function of something intrinsic to their personality, some combination of curiosity, self confidence, sociability, and energy.

“A Maven is a person who has information on a lot of different products or prices or places. This person likes to initiate discussions with consumers and respond to requests.” What sets Mavens apart, though, is not so much what they know but how they pass it along. The fact that Mavens want to help, for no other reason than because they like to help, turns out to be an awfully effective way of getting someone’s attention.

Salesmen — with the skills to persuade us when we are unconvinced of what we are hearing, and they are as critical to the tipping of word-of-mouth epidemics as the other two groups.

Nonverbal cues are as or more important than verbal cues. The subtle circumstances surrounding how we say things may matter more than what we say.

In epidemics, the messenger matters: messengers are what make something spread. But the content of the message matters too. And the specific quality that a message needs to be successful is the quality of “stickiness.” Is the message — or the food, or the movie, or the product — memorable? Is it so memorable, in tact, that it can create change, that it can spur someone to action?

We all want to believe that the key to making an impact on someone lies with the inherent quality of the ideas we present. The line between hostility and acceptance, in other words, between an epidemic that tips and one that does not, is sometimes a lot narrower than it seems.

There is a simple way to package information that, under the right circumstances, can make it irresistible. All you have to do is find it.

Epidemics are sensitive to the conditions and circumstances of the times and places in which they occur.

What we think of as inner states — preferences and emotions — are actually powerfully and imperceptibly influenced by seemingly inconsequential personal influences, by a newscaster we watch or a few minutes a day or by someone we sit next to, in silence, in a two-minute experiment. The essence of the Power of Context is that the same thing is true for certain kinds of environments — that in ways that we don’t necessarily appreciate, our inner states are the result of our outer circumstances.

Character, then, isn’t what we think it is or, rather, what we want it to be. It isn’t a stable, easily identifiable set of closely related traits, and it only seems that way because of a glitch in the way our brains are organized. Character is more like a bundle of habits and tendencies and interests, loosely bound together and dependent, at certain times, on circumstance and context. The reason that most of us seem to have a consistent character is that most of us are really good at controlling our environment.

We need to remember that small changes in context can be just as important in tipping epidemics, even though that fact appears to violate some of our most deeply held assumptions about human nature.

When people are asked to consider evidence or make decisions in a group, they come to very different conclusions than when they are asked the same questions by themselves. Once we’re part of a group, we’re all susceptible to peer pressure and social norms and any number of other kinds of influence that can play a critical role in sweeping us up in the beginnings of an epidemic.

But if there is difficulty and volatility in the world of the Tipping Point, there is a large measure of hopefulness as well. Merely by manipulating the size of a group, we can dramatically improve its receptivity to new ideas. By tinkering with the presentation of information, we can significantly improve its stickiness. Simply by finding and reaching those few special people who hold so much social power, we can shape the course of social epidemics. In the end, Tipping Points are a reaffirmation of the potential for change and the power of intelligent action. Look at the world around you. It may seem like an immovable, implacable place. It is not. With the slightest push — in just the right place — it can be tipped.