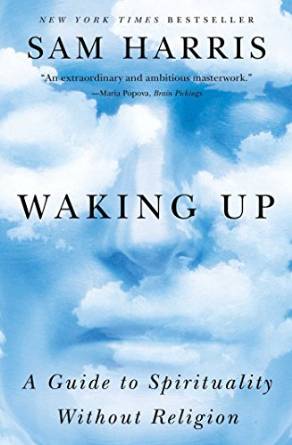 A fabulous read about practicing spirituality using tried and true science, all while staying away from of the realm of fiction. Harris spends little time debunking the myths of current world religions and instead, goes deep into ways to get the most out of known methods of meditation and mindfulness. This book really opened my eyes to the possibility of different forms of consciousness achievable by the human brain and why one should seek them out. Highly recommended read.

Each of us is looking for a path back to the present: We are trying to find good enough reasons to be satisfied NOW.

20% of Americans describe themselves as “spiritual but not religious”

There is now a large literature of the psychological benefits of meditation. different techniques produce long-lasting changes in attention, emotion, cognition, and pain perception, and these correlate with both structural and functional changes in the brain.

The quality of mind cultivated in vipassana is almost always referred to as “mindfulness,” and the literature on it psychological benefits is not substantial. There is nothing spooky about mindfulness. It is simply a state of clear, nonjudgmental, and distracted attention to the contents of consciousness, whether pleasant or unpleasant. Cultivating the quality of mind has been shown to reduce pain, anxiety, and depression; improve cognitive function; and even produce changes in gray matter density in regions of the brain related to learning and memory, emotional regulation, and self-awareness.

With practice, mindfulness becomes a well-formed habit of attention, and the difference between it and ordinary thinking will become increasingly clear.

Your mind is the basis of everything you experience and of every contribution you make to the lives of others. Given this fact, it makes sense to train it.

The Mystery of Consciousness

The birth of consciousness must be the result of organization: Arranging atoms in certain ways appears to bring about the experience of BEING that very collection of atoms.

Consciousness is the one thing in this universe that cannot be an illusion.

The contents of consciousness can often be made sense of in terms of their underlying neurophysiology. However, when we ask why such phenomena should be experienced in the first place, we are returned to the mystery of consciousness in full.

Consciousness – whatever its relation to neural events – is divisible. And just as it isn’t shared between the brains of separate individuals, it need not be shared between the hemispheres of a single brain once the structures that facilitate such sharing have been cut.

We now know that at leas two systems in the brain – often referred to as “dual processes” – govern human cognition, emotion, and behavior. One is evolutionary older, unconscious, and automatic; the other evolved more recently and is both conscious and deliberative.

Your conscious memories of practicing a musical instrument, driving a car, or tying your shoelaces are neurologically distinct from your learning now to do these things from and from your knowing how to do them now.

The Riddle of the Self

The conventional sense of self is an illusion – and that spirituality largely consists in realizing this, moment to moment.

When compared to merely thinking about significant life events, contemplating daily hassles, or comparing oneself favorably to others, thinking about what one is grateful for increases one’s feelings of well-being, motivation, and positive outlook towards the future.

You need not wait for some pleasant distraction to shift your mood. You can simply pay close attention to negative feelings themselves, without judgement or resistance. What is anger? Where do you feel it in your body? How is it arising in each moment? And what is it that is aware of the feeling itself? Investigating in this way, with mindfulness, you can discover that negative states of mind vanish all by themselves.

The sense of self – the sense that there is a thinker behind one’s thoughts, an experiencer amid the flow of experience – is an illusion. The feeling that we call “I” is itself the product of thought. Having an ego is what it feels like to be thinking without knowing that you are thinking.

The goal of meditation is to uncover a form of well-being that in inherent to the nature of our minds. It must, therefore, be available in the context of ordinary signs, sounds, sensations, and even thoughts.

Meditation doesn’t entail the suppression of such thoughts, but it does require that we notice thoughts as they emerge and recognize them to be transitory appearances in consciousness.

When you are able to rest naturally, merely witnessing the totality of experience, and thoughts themselves are left to arise and vanish as they will, you can recognize that consciousness is intrinsically undivided. In the moment of such an insight, you will be completely relieved of the feeling that you call “I.” You will still see this page, of course, but it will be an appearance in consciousness, inseparable from consciousnesses itself – and there will be no sense that you are behind your eyes, doing the reading.

Look for whatever it is that you are calling “I” without being distracted by even the subtlest undercurrent of thought – and notice hat happens the moment you turn consciousness upon itself.

If you an anxious before giving a speech, become willing to feel the anxiety fully, so that it becomes a meaningless pattern of energy in your mind and body. Embracing the contents of consciousness in any moment is a very powerful way of training yourself to respond differently to adversity. However, it is important to distinguish between accepting unpleasant sensations and emotions as a strategy – while covertly hoping they will go away – and truly accepting them as transitory appearances in consciousness.

Gurus, Death, Drugs, and Other Puzzles

Subjecively speaking, there is only consciousness and its contents; there is no inner self who is conscious.

The “war on drugs” has been lost and should never have been waged. I can think of no right more fundamental than the rights to peacefully steward the contents of one’s own consciousness.

There was a period on my 20’s when I found psilocybin and LSD to be indispensable tools, and some of the most important hours of my life were spent under their influence. Without them, I might never have discovered that there was an inner landscape of mind worth exploring.

Psychedelics such as psilocybin, Lysergic acid diethylamide (LSD), N,N-Dimethyltryptamine (DMT), and mescalin , all powerfully alter cognition, perception, and mood. Most seem to exert their influence through the serotonin system in the brain, primarily by binding to 5-HT2A receptors (though several have affinity for other receptors as well), leading to increased activity in the prefrontal cortex (PFC). Although the PFC in turn modulated subcortial dopamine production – and certain of these compounds, such as LSD, bind directly to dopamine receptors – the effect of psychedelics appears to take place largely outside dopamine pathways, which could explain why these drugs are not habit-forming.

One thing is certain: The mind is vaster and more fluid than our ordinary, waking consciousness suggests. And it is simply impossible to communicate the profundity (or seeming profundity) of psychedelics states to those who have never experienced them. Indeed, it is even difficult to remind oneself of the power of these states once they have passed.

The power of psychedelics, however, is that they often reveal, in the span of a few hours, depth of awe and understanding that can otherwise elude us for a lifetime.

I have two daughters who will one day take drugs. Of course, I will do everything in my power to see that they choose their drugs wisely, but a life lived entirely without drugs is neither foreseeable nor, I think, desirable. I hope they someday enjoy a morning cup of tea or coffee as much as I do. If they drink alcohol as adults, as they probably will, I will encourage them to do it safely. If they choose to smoke marijuana, I will urge moderation. Tobacco should be shunned, and I will do everything within the bounds of decent parenting to steer them away from it. Needless to say, if I knew that either of my daughters would eventually develop a fondness for methamphetamine or crack cocaine, I might never sleep again. But if they don’t try a psychedelic like psilocybin or LSD at least once in their adult lives, I will wonder whether they had missed one of the most important rites of passage a human being can experience.

Changing your perception of the world is often as good as changing the world.

Consciousness itself is divisible – as we saw in the case of split-brain patients – and even in an intact brain consciousness is blind to most of what the mind is doing.

Yes, the cosmos is vast and appears indifferent to our mortal schemes, but every present moment of consciousness is profound. In subjective terms, each of us is identical to the very principle that brings value to the universe. Experiencing this directly – not merely thinking about it – is the true beginning of spiritual life.

However numerous your faults, something in you at this moment is pristine – and only you can recognize it. Open your eyes and see.