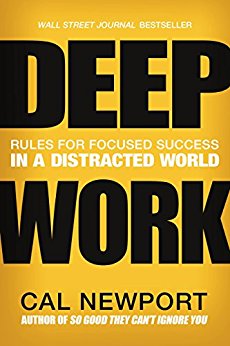 This is the best book I have read all year. Written by a computer science professor and productivity guru, many of the examples and case studies are extremely relateable for me. The book explains how being focused and pushing yourself to your intellectual maximums is a skill that is highly sought after in today’s economy all the while it is becoming more and more rare. This leaves the doors open for deep workers to be highly successful. Packed with actionable strategies, Deep Work has made me want to change how I work on tasks to favour long stretches of uninterrupted, deep thinking.

Deep Work: Professional activities performed in a state of distraction-free concentration that push your cognitive capabilities to their limit. These efforts create new value, improve your skill, and are hard to replicate.

Microsoft CEO Bill Gates famously conducted “Think Weeks” twice a year, during which he would isolate himself (often in a lakeside cottage) to do nothing but read and think big thoughts.

Shallow Work: Noncognitively demanding, logistical-style tasks, often performed while distracted. These efforts tend to not create much value in the world and are easy to replicate.

Our work culture’s shift toward the shallow is exposing a massive economic and personal opportunity for the few who recognize the potential of resisting this rend and prioritizing depth.

To succeed you have to produce the absolute best stuff you’re capable of producing – a task that requires depth.

Two core abilities for thriving in the new economy:
1. The ability to quickly master hard things
2. The ability to produce at an elite level, in terms of both quality and speed.

Skills, be they intellectual or physical, eventually reduce down to brain circuits. This new science of performance argues that you get better at a skill as you develop more myelin around the relevant neurons, allowing the corresponding circuit to fire more effortlessly and effectively. To be great at something is to be well myelinated.

The reason, therefore, why its important to focus intensely on the task at hand while avoiding distraction is because this is the only way to isolate the relevant neural circuit enough to trigger useful myelination. By contrast, if you’re trying to learn a complex new skill in a state of low concentration (perhaps you have your Facebook feed open), you’re firing too many circuits simultaneously and haphazardly to isolate the group of neurons you actually want to strengthen.

Generally speaking, as knowledge work makes more complex demands of the labour force, it becomes harder to measure the value of an individuals efforts.

Busyness as a Proxy for Productivity: In the absence of clear indicators of what it means to be productive and valuable in their jobs, many knowledge workers turn back toward an industrial indicator of productivity: doing lots of stuff in a visible manner.

To support deep work often requires the rejection of much of what is new and high tech.

The idle mind is the devil’s workshop… when you lose focus, your mind tends to fix on what could be wrong with your life instead of what’s right.

To build your working life around the experience of flow produced by deep work is a proven path to deep satisfaction.

As a reader of this book your are a disciple of depth in a shallow world.

You have a finite amount of willpower that becomes depleted as you use it.

The key to developing a deep work habit is to move beyond good intentions and add routines and rituals to your working life designed to minimize the amount of your limited willpower necessary to transition into and maintain a state of unbroken concentration.

The ability to rapidly switch your mind from shallow to deep mode doesn’t come naturally. Without practice, such switches can seriously deplete your finite willpower reserves.

Distraction remains a destroyer of depth.

At the end of a workday, shut down your consideration of work issues until the next morning – no after dinner email check, no mental replays of conversations, and no scheming about how you’ll handle and upcoming challenge.

For a novice, somewhere around an hour a day of intense concentration seems to be a limit, while for experts this number can expand to as many as four hours.

The ability to concentrate intensely is a skill that must be trained.

To simply wait and be bored has become a novel experience in modern life, but from the perspective of concentration training, it’s incredibly valuable.

Your ability to concentrate is only as strong as your commitment to train it.

The Any-Benefit Approach to Network Tool Selection: You’re justified in using network tools if you can identify ANY possible benefit in its use or anything you might possibly miss out on if you don’t use it. This is a terrible approach.

The Craftsman Approach to Tool Selection: Identify the core factors that determine success and happiness in your professional and personal life. Adopt a tool only if its positive impacts on these factors substantially outweigh its negative impacts.

Ban yourself from using them for 30 days. All of them: Facebook, Instagram, Google+, Twitter, Snapchat.
Ask yourself the following two questions about each of the services you temporarily quit:
1. Would the last 30 days have been notably better if I has been using the service.
2. Did people care that I wasn’t using this service?

It’s crucial that you figure out in advance what you’re going to do with your evening and weekends before they begin. Structured hobbies provide good fodder for these hours, as they generate specific actions with specific goals to fill your time.

Its an idea that may seem extreme at first but will soon prove indispensable in your quest to take full advantage of the value of deep work. Schedule every minute of your day.

No boss will explicitly answer, “One hundred percent of your time should be shallow!” (unless you’re entry level, at which point you need to delay this exercise until you’e built enough skills to add deep efforts to your official work responsibilities), but a boss might reply, in so many words “as much shallow work as is needed for you to promptly do whatever we need from you at the moment.” In this case, the answer is still useful, as it tells you that this job isn’t a job that supports deep work and a job that doesn’t support deep work is not a job that can help you succeed in our current information economy.

Make people who send you email do more work.

The notion that all messages, regardless of purpose or sender, arrive in the same undifferentiated inbox, and that there’s an expectation that every message deserves a (timely) response, is absurdly unproductive.

The deep life, of course, is not for everybody. It requires hard work and drastic changes to your habits.

There’s also an uneasiness that surrounds any effort to produce the best things you’re capable of producing, as this forces you to confront the possibility that your best in not (yet) that good.

I’ll live a focused life, because it’s the best kind there is.