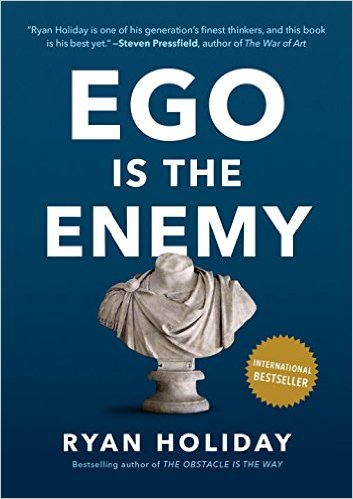 Ego is the Enemy – by Ryan Holiday

Ego is not your Amigo: the book. A great read that prompts you to do some real introspective work on your reasons for doing the things that you do. Holiday shows how one must battle his ego throughout all stages on life because ego hides what is real, and prevents you from accomplishing your goals. The biggest lesson is to forget yourself and your story so you can focus on your work.

I have tried to arrange these pages so that you might end in the space place I did when I finished writing it: that is, you will think less of yourself. I hope you will be less invested in the story you tell about your own specialness, and as a result, you will be liberated to accomplish the world-changing work you’ve set out to achieve.

The ego we see most commonly goes by a more casual definition: an unhealthy belief in our own importance. Arrogance. Self-centered ambition. It’s that petulant child inside every person, the one that chooses getting his or her way over anything or anyone else. The need to better than, more than, recognized for, far past any reasonable utility – that’s ego. Its the sense of superiority and certainty that exceeds the bounds of confidence and talent.

At any given time in life, people find themselves at one of three stages. We’re aspiring to something – trying to make a dent in the universe. We have achieved success – perhaps a little, perhaps a lot. Or we have failed – recently or continually.

– Humble in our aspirations
– Gracious in our success
– Resilient in our failures.

When we remove ego, we’re left with what is real.

Where Isocrates and Shakespeare wished us to be self-contained, self-motivated, and ruled by principle, most of us have been trained to do the opposite. Our cultural values almost try to make us dependent on validation, entitled, and ruled by our emotions.

One might say that the ability to evaluate one’s own ability is the most important skill of all. Without it, improvement is impossible.

“Those who know do not speak. Those who speak do not know.” – Lao Tzu

It’s a temptation that exists for everyone – for talk and hype to replace action.

Research shows that while goal visualization is important, after a certain point our mind begins to confuse it with actual progress.

We talk to fill the void and uncertainty.

The only relationship between work and chatter is that one kills the other. Let the others slap each other on the back while you’re back in the lab or the gym or pounding the pavement.

Impressing people is utterly different from being truly impressive.

False ideas about yourself destroy you. For me, I always stay a student.

A student is self-critical and self-motivated, always trying to improve his understanding so that he can move on to the next topic, the next challenge. A real student is also his own teacher and his own critic. There is no room for ego there.

Epictetus says. You can’t learn if you think you already know. You will not find the answers if you’re too conceited and self-assured to ask the questions. You cannot get better if you’re convinced you are the best.

What humans require in our ascent is purpose and realism. Purpose, you could say is like passion with boundaries. Realism is detachment and perspective.

The critical work that you want to do will require your deliberation and consideration. Not passion. Not naivete.

When you are just starting out, we can be sure of a few fundamental realities:
1. You’re not nearly as good or as important as you think you are
2. You have an attitude that needs to be readjusted
3. Most of what you think you know or most of what you learned in books or in school is out of date or wrong.

Greatness comes from humble beginnings; it comes from grunt work. It means you’re the least important person in the room – unit you change that with results.

Most peoples egos prevent them from appreciating: the person who clears the path ultimately controls its direction, just as the canvas shapes the painting.

“A person who thinks all the time has nothing to think about except thoughts, so he loses touch with reality and lives in a world of illusions.” – Alan Watts

Living clearly and presently takes courage. Don’t live in the haze of the abstract, live with the tangible and real, even if its uncomfortable. Be part of what’s going on around you. Feast on it, adjust for it. There’s no one to perform for. There is just work to be done and lessons to be learned, in all that is around us.

Make is so you don’t have to fake it – that’s the key.

Every time you sit down to work, remind yourself: I am delaying gratification by doing this. I am passing the marshmallow test. I am earning what my ambition burns for. I am making an investment in myself instead of in my ego. Give yourself a little credit for this choice, but not so much, because you’ve got to get back to the task at hand: practicing, working, improving.

Success is intoxicating, yet to sustain it requires sobriety.

We must understand that we are a small part of an interconnected universe.

Do you know how you can tell when someone is truly humble? I believe there’s one simple test: because they consistently observe and listen, the humble improve. They don’t assume, ‘I know the way.’

Crafting stories out of past events is a very human impulse. It’s also dangerous and untrue. Writing our own narrative leads to arrogance.

The way to do really big things seems to be to start with deceptively small things.

Too often, artists who think it was “inspiration” or “pain” that fueled their art and create an image around that – instead of hard work and sincere hustle – will eventually find themselves at the bottom of a bottle or on the wrong end of a needle. Instead of pretending that we are living some great story, we must remain focused on the execution – and on executing with excellence. We must shun the false crown and continue working on what got us here. Because that’s the only thing that will keep us here.

All of us regularly say yes unthinkingly, or out of vague attraction, or out of greed or vanity. Because we can’t say no – because we might miss out on something if we did. We think “yes” will let us accomplish more, when in reality it prevents exactly what we seek. All of us waste precious life doing things we don’t like, to prove ourselves to people we don’t respect, and to get things we don’t want.

According to Seneca, the Greek word euthymia is one we should think of often: it is the sense of our own path and how to stay on it without getting distracted by all others that intersect it. In other words, it’s not about beating the other guy. It’s not about having more than the others. It’s about being what you are, and being as good as possible at it, without succumbing to all the things that draw you away from it. It’s about going where you set out to go.

So why do you do what you do? That’s the questions you need to answer. Stare at it until you can. Only then will you understand what matters and what doesn’t.

Let’s make one thing clear: we never earn the right to be greedy or to pursue our interests at the expense of everyone else. To think otherwise is not only egotistical, it’s counter-productive.

Why do you think that great leaders and thinkers throughout history have “gone out into the wilderness” and come back with inspiration, with a plan, with an experience that puts them on a course that changes the world? It’s because in doing so they found perspective, they understood the larger picture in a way that wasn’t possible in the bustle of everyday life. Silencing the noise around them, they could finally hear the quiet voice they needed to listen to.

We have to stand up for ourselves, right? But do we? So often, this is just ego, escalating tension more than dealing with it. Merkel (Prime Minister of Germany) is firm, clear and patient. She’s willing to compromise on everything except the principle at stake – which far too many people lose sight of. That is sobriety. That is command of oneself.

This moment is not your life, But it is a moment in your life. How will you use it?

The less attached we are to outcomes, the better. When fulfilling our own standards is what fills us with pride and self-respect. When the effort – not the results, good or bad – is enough. With ego, this is not nearly sufficient. No, we need to be recognized. We need to be compensated.

“Success is peace of mind, which is a direct result of self-satisfaction in knowing you made the effort to do your best to become the best that you are capable of becoming.”

“He who will do anything to avoid failure will almost certainly do something worthy of a failure.” – Seneca

If your reputation can’t absorb a few blows, it wasn’t worth anything in the first place.

This is characteristic of how great people think: They just hold themselves to a standard that exceeds what society might consider to be objective success. Because of that, they don’t much care what other people think; they care whether they meet their own standards. And these standard are much, much higher than everyone else’s.

Reflecting on what went well or how amazing we are doesn’t get us anywhere, except maybe to where we are right now. But we want to go further, we want more, we want to continue to improve. Ego blocks that, so we subsume it and smash it with continually higher standards.

Take inventory for a second. What do you dislike? Whose name fills you with revulsion and rage? Now ask Have these strong feelings really helped you accomplish anything? Take an even wider inventory. Where has hatred and rage ever really gotten anyone?

See much, study much, suffer much, that is the path to wisdom.