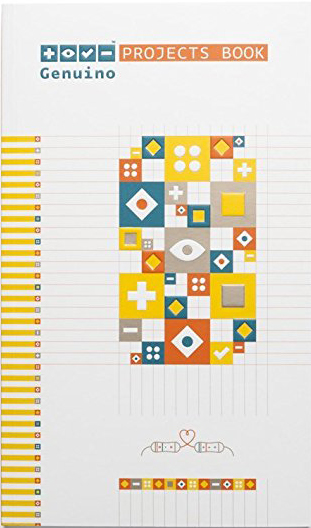 This is a book full of projects to teach you the basics of electrical engineering using an Arduino/Genuino chip. There were only a few projects that were genuinely cool but the book did a good job of teaching you about all of the components that came in the Starter Kit. Much of the book was explaining how to write code to control I/O which I didn’t get much out of because it was very basic programming. I would recommend to anyone who wants to get their feet wet with micro controllers and beginner coding.

Actuator – A type of component that changes electrical energy into motion. Motors are a type of actuator.

Alternating Current – A type of current where electricity changes its direction periodically. This is the sort of electricity that comes out of a wall socket.

Amperage – The amount of electrical charge flowing past a specific point in your circuit. Describes te current as it flows through a conductor, like a wire.

Analog – Something that can continuously vary over time.

Anode – The positive + end of a capacitor or diode.

Back-voltage – Voltage that pushes back against the current that created it. It can be created by motors spinning down. This can damage circuits, which is why diodes are often used in conjunction with motors.

Baud – Shorthand for “bits per second”

Capacitance – The ability of something to hold an electrical charge.

Cathode – The end of a capacitor or diode that typically connects to the ground.

Circuit – A circular path from a power supply, through a load, and then back again to the other end of the power supply. Current flows in a circuit only if it is closed, that is, if the outgoing and return path are both uninterrupted, or closed.

Common cathode LED – Types of LEDs that have multiple colours in one fixture, with one cathode and multiple anodes.

Current – The flow of electrical charge through a closed circuit. Measured in amps.

Datasheet – A document written by engineers for other engineers that describes the design and functionality of electrical components. Typical information in a datasheet includes the maximum voltage and current a component requires, as well as an explanation of the functionality of the pins.

Decoupling capacitors – Capacitors that are used to regulate spikes and dips in voltage, often placed close to a sensor or actuator.

Direct Current – A type of current which always flows in the same direction. Arduino uses DC.

Drain(transistor) – The pin that connects to the higher current/voltage load to be controlled.

Dual In-line Package (DIP) – a type of packaging for integrated circuits that allows the components to be easily inserted into a breadboard.

Duty cycle – A ratio indicating the amount of time over a certain period that a component is turned on. When using a PWM value of 127 (out of 256) you’re at 50% duty cycle.

Electricity – A type of energy generated by electric charges.

Ground – The point of a circuit where there is 0 potential electrical energy. Without a ground, electricity will not have a place to flow in a circuit.

Induction – The process of using electrical energy to create a magnetic field. This is used in motors to spin them around.

Integrated Circuit – A circuit that has been created on a tiny piece of silicon and embedded in plastic or epoxy. Pins, or legs, protruding from the body allow you to interact with the circuit inside.

Ohm – Unit of measurement of resistance. Represented by Omega.

Parallel – Components connected across the same two points in a circuit are in parallel. Parallel components always have the same voltage drop across them.

Phototransistor – A transistor which is controlled by light rather than by current.

Power Supply – A source of energy, usually a battery, transformer, or even the USB port of your computer. Comes in many varieties, such as regulated/unregulated, AC or DC. Usually the voltage is specified, along with the maximum current the supply can deliver before failing.

Pulse Width Modulation (PWM) – A way to simulate an analog output when using a digital device, PWM involves turning a pin on and off at a very rapid rate. The ratio on ON time to OFF time determines the simulated analog result.

Resistance – A measure of how efficiently a material will conduct electricity.

Sensor – A component that measures one form of energy (like heat, light, or mechanical energy) and converts it to electrical energy.

Series – Components are in series when current flows from the first into the next. The current flowing through both is the same, and the voltage drops across each component.

Source (transistor) – The pin on a transistor that connects to ground. When the gate receives power, the source and drain are connected, completing the circuit.

Transducer – Something that changes one form of energy to another.

Transistor – A 3 terminal (usually) electronic device which can act as either an amplifier or a switch. A control voltage or current between two leads controls a (usually) higher voltage or current between a different pair of leads. Common transistor types include the Bipolar Junction Transistor (BJT) and the Metal Oxide Semiconductor Field Effect Transistor (MOSFET). Often used to allow a small current from a Geniuno (limited to 40 mA) to control substantially larger currents, such as those needed by motors, relays or incandescent lamps. Depending on ho they are constructed, transistors are either N-channel or P-channel, which determines how they should be connected.

Voltage – A measure of potential energy, that a charge might be pushed with if provided a closed circuit.

Voltage divider – A type of circuit that provides an output that is a fraction of its input voltage. A potentiometer is an example.