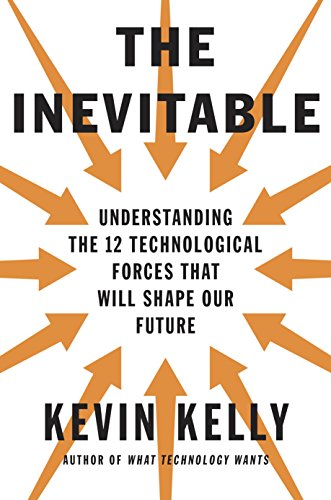 The Inevitable – by Kevin Kelly

A quick look into what the future might have in store for us, and how technology will shape our lives. Kelly explains all that is possible today, as well as makes many predictions based on global trends that he believes are inevitable. A pretty interesting read that mostly kept my attention.

A world without discomfort is utopia. But it is also stagnant. A utopia has no problems to solve, but therefore no opportunities either.

The total number of web pages, including those that are dynamically created upon request, exceeds 600 trillion. Thats almost 10,000 pages per person alive. An this entire cornucopia has been created in less than 8000 days.

One study found that only 40 % of the web is commercially manufactured. The rest is fueled by duty or passion.

The web will be a low level constant presence like electricity; always around us, always on, and subterranean. By 2050 well come to think of the web as an ever present type of conversation.

Most of the previous attempts to make a diagnostic AI have been pathetic failures, but Watson really works. When , in plain english, I give it the symptoms of a disease I once contracted in India, it gives me a list of hunches, ranked form most to least probable. The most likely cause is giardia – the right answer.

The perfect storm of cheap parallel computation, bigger data, and deeper algorithms generated the 60 years in the making overnight success of AI.

Before the end of this century, 70 % of todays occupations will be replaced by automation – including the job you hold. In other words, robots are inevitable and job replacement is just a matter of time.

We need to let robots take over. Many of the jobs that politicians are fighting to keep away from robots are jobs that no one wakes up in the morning really wanting to do.
It is inevitable. Let the robots take our jobs, and let them help us dream up new work that matters.

You can’t simply duplicate someone else’s trust. Trust must be earned, over time. It cannot be faked or counterfeited. Since we prefer to deal with someone we can trust, we will often pay a premium for that privilege. We call that branding.

The amount of time people spend reading has almost tripled since 1980. By 2015 more than 60 trillion pages have been added to the web and that grows by several billion each day.

The LINK and the TAG may be two of the most important inventions of the last 50 years. You are anonymously marking up the web, making it smarter, when you link or tag something together.

As we increase dematerialzation, decentralization, simultaneity, platforms, and the cloud – as we increase all those at once, access will continue to displace ownership. For most things in daily life, accessing will trump owning.

The major reason for working on free stuff is to improve my own damn software.

Who would have believed that poor farmers could secure $100 loanes shared from perfect strangers on the other side of the planet – and pay them back? This is what Kiva does with peer-to-peer lending. Several decades ago international banks discovered they has better repayment rates when they lent small amounts to the poor than when they lent big amounts to rich state governments.

Netflix has 300 people working on its recommendation system, with a budget of $150 million.

You do not see all the posts your friends make. Which ones have been filtered out? By what criteria? Only Facebook knows, and it considers the formulas trade secrets. What is it optimizing for is not even communicated. The company talks about increasing the satisfaction of members, but a fair guess is that it is filtering your news stream to optimize the amount of time you spend on Facebook -a much easier thing to measure than your happiness.

In a world of abundance, the only scarcity is human attention.

Its production is inherently limited while everything else is becoming abundant, Since it is the last scarcity, wherever attention flows, money will follow.

But not all attention is equal. In the advertising business, quantity of attention is often reflected in a metric called CPM, or cost per thousand (M is Latin for thousand) Thats a thousand views. or a thousand readers or listeners.

Email is a system that lets other people add things to my todo list.

The only things that are increasing in cost while everything else heads to 0 are human experiences – which cannot be copied.

The value of experience is rising. Luxury entertainment is increasing 6.5 % annually.

If you want a glimpse of what we humans so when the robots take our current jobs, look at experiences. Thats where well spend our money (because they wont be free) and thats where well make our money.

The more powerful the invention or creation, the more likely and more important it is that is will be transformed by others. In 30 years the most important cultural works and the most powerul mediums will be those that have been remixed the most.

For the past decade, researchers inventing VR have settled on a standard demonstration of this overpowering presence. The visitor waiting for the demo stand in the center of an actual real nondescript waiting room. A pair of large dark goggles rest on a stool. The visitor dons the goggles and is immediately immerged into a virtual version of the same room she was standing in, with the same nondescript paneling and chairs. Not much is changed from her point of view. She can look around. The scene looks a little coarser through the goggles. But slowly the floor of the room begins to drop away, leaving the visitor standing on a plank that now floats over the receding floor 30 meters below. She is asked to walk out father on the plank suspending high over a most realistic put. The realism of the scene has been improved over the yeas so that bu now the response of the visitor is very predictable. Either she cannot move her feet or she trembles as she inches forward, palms sweating.

Computers have been on a steady march toward us, At first computers were house in distant air-conditioned basements, then they moved to nearby small rooms, then they crept closer to us perched on our desks, then they sopped onto our laps, and recently they snuck into our pockets. The next obvious step is for computers to lay against our skin.

In the coming decades, we’ll keep expanding what we interact with. This expansion follows 3 thrusts.
1. More senses – We will keep adding new sensors to things we make.
2. More intimacy – Technology will get closer to us than a watch and pocket phone.
3. More immersion – Computation so close that we are inside it. From within a technologically created world, we interact with each other in new ways or interact with the physical world in a new way (AR).

Cheap, abundant VR will be an experience factory. We’ll use it to visit environments too dangerous to risk in the flesh, such as warzones, deep seas, or volcanoes. Or we’ll use it for experiences we cant easily get to as humans – visit the inside of a stomach, the surface or a comet. Or to swap genders, or become a lobster.

The first technological platform to disrupt society within the lifespan of a human individual was personal computers. Mobile phones were the second platform, and they revolutionized everything in only a few decades. The next disrupting platform – now arriving – is VR.

The most valuable asset that Facebook owns is not its software platform but the fact that it controls the true nature identities of a billion peoples, which are verified from the references of the true identities of friends and colleagues. That monopoly of persistent identity is the real engine of Facebook’s remarkable success.

When cell phones first appeared among the early adopters in the 1990s, there was a terrible cacophony of ringers. Cell phones rang at high decibels on trains, in bathrooms, in movie theaters.
Silent vibrators were invented, people learned tot ext, and social norms prevailed. I can go to a movie today in which every person in the theater has a cell phone, and not hear one ring or see one lighted screen. Its considered not cool. We’ll evolve the same kind of social conventions and technical fixes that will make life logging acceptable.

I applaud Snowden’s whistle blowing not because I believe it will reduce tracking, but because it can increase transparency. If symmetry can be restored so we can track who is tracking, if we can hold the trackers accountable by law (there should be regulation) and responsible for accuracy, and if we cn make the benefits obvious and relevant, then I suspect the expansions of tracking will be accepted.

Because of our global connectivity, a relatively simple ack could cause an emerging cascade or failure, which would reach impossible scale very quickly. Worldwide disruptions of our social fabric ae in fact inevitable. One day in the next three decades the entire internet/phon system will blink off for 24 hours, and we’ll be in shock for years afterwards.

Ironically, in an age of instant global connections, m certainty about anything had decreased. Rather than receviing truth from an authoirty, I am reduced to assembling my own certainty from the liquid stream of facts flowing through the web.
That means in general I have to constantly question what I think I know.

Jeff Hammerbacher, a former Facebook engineer, famously complained that the “best minds of my generation are thinking about how to make people click ads”

Picture the thousands of millions of people online at this very minute. To my eye they are not wasting time with silly associative links, but are engaged in a more productive way of thinking – getting instant answers, researching, responding, daydreaming, browsing, being confronted with something very different, writing down their own thought, posting the opinions, even if small. Compare that to the equivalent of hundreds of millions of people 50 years ago watching TV or reading a newspaper in a big chair.

Thousands of years from now, then historians review the past, our ancient time here at the beginning of the third millennium will be seen as an amazing moment.

Future people ill envy us, wishing they could have witnessed the birth we saw.

At current rates of technological adoption I estimate that by the year 2025 every person alive – that is, 100% of the planets inhabitants – will have access to this platform via some almost free device.

The Beginning of course, is just the beginning.