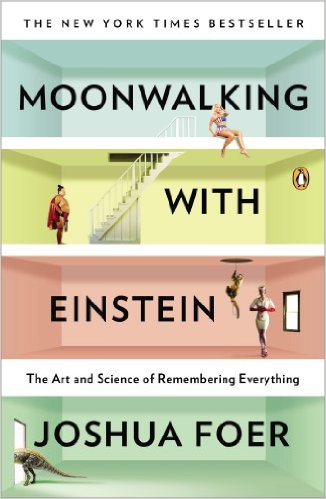 Moonwalking with Einstein – by Joshua Foer

One of my favourite books of the year. Foer went from covering the World Memory Championship as a journalist to competing in the peculiar event a year later. This book is a great story about how the seemingly supernatural ability to memorize a deck of cards in under 2 minutes, or memorize 1000 binary digits in 5 minutes may lie dormant in all of us. I was left beaming with excitement thinking about how truly amazing the human mind is and all of the great feats it can accomplish.

What you have to understand is that even average memories are remarkably powerful if used properly.

Physiologically, we are virtually identical to our ancestors who painted images of bison on the walls of the Lascauz cave in France, among the earliest cultural artifacts to have survived to the present day. Our brains are no larger or more sophisticated than theirs. If one of their babies were to be dropped into the arms of an adoptive parent in 21st century New York, the child would likely grow up indistinguishable from his or her peers.

Everything we learn is permanently stored in the mind, although sometimes particular details are not accessible.

A memory, at the most fundamental physiological level, is a pattern of connections between neurons. Every sensation that we remember, every though that we thing, transforms our brains by altering the connections within that vast network. By the time you get to the end of this sentence, your brain will have physically changed.

A memory only pops directly into consciousness if it is cued by some other thought or perception.

The brain is a mutable organ, capable – within limits – of reorganizing itself and re-adapting to new kinds of sensory input, a phenomenon known as neuroplasticity.

Surprisingly. when the mental athletes were learning new information, they were engaging several regions of the brain known to be involved in two specific tasks: visual memory, and spatial navigation.

Ed Cooke explained his procedure for making a name memorable.
The trick is actually deceptively simple. It is always to associate the sound of a person;s name with something you can clearly imagine. It’s all about creating a vivid image in your mind that anchors your visual memory of the person’s face to a visual memory connected to the person’s name.
The secret to success in the names and faces event, and to remembering names in the real world, is simply to turn Bakers into bakers or Foers into fours. Or Reagans into ray guns. It’s a simple trick but its highly effective.

Chunking is a way to decrease the number of items you have to remember by increasing the size of each item.

We don’t remember isolated facts; we remember things in context.

We remember events by positioning them in time relative to other events.
Monotony collapses time; novelty unfolds it. You can exercise daily and eat healthily and live a long life, while experiencing a short one. If you spend your life sitting in a cubicle and passing papers, one day is bound to blend unmemorably into the next – and then disappears. That’s why its important to change routines regularly, and take vacations to exotic locales, and have as many new experiences as possible that can serve to anchor our memories. Creating new memories stretches out psychological time, and lengthens our perception of our lives.

The general idea with most memory techniques is to change whatever boring thing is being inputted into your memory into something that is so colourful, so exciting, and so different from anything you’ve seen before that you can’t possibly forget it.

To use Simonides’ technique, all one has to do is convert something unmemorable, like a string of numbers or a desk of cards or a shopping list or Paradise Lost, into a series of engrossing visual images and mentally arrange them within an imagined space, and suddenly those forgettable items become unforgettable.

The Ad Herennium advises readers at length about creating the images for one’s memory palace: the funnier, lewder and more bizarre, the better.

Before I could embark on any serious degree of memory training, I first needed a stockpile of memory palaces at my disposal.

The end of remembering (using computers to remember): The next step is a brain-computer interface that lets the mind exchange data directly with a digital memory bank, a project that a few cutting edge researchers are already working on, and which is bound to become a major area of research in the decades ahead.

The Major System
A simple code to convert numbers into phonetic sounds. Those sounds can then be turned into words, which can in turn becomes images for a memory palace.

To make those consonants meaningful, you’re allowed to freely add vowels. So 32 is a man, 33 is your mom, 86 fish etc.

Most mental athletes use a more complex technique that is known on the Worldwide Brain Club as PERSON-ACTION-OBJECT or PAO.
In PAO every two-digit number 0-99 is represented by a single image of a person performing an action on an object.
A 6 digit number can then be turned into a single image by combining the person from the first number with the action from the second with the object from the third.
It takes a lot of remembering just to be able to remember.

Mental athletes memorize decks of playing cards in much the same way, using PAW system in which each of the fifty two cards is associated with its on person/action/object image. This allows any triplet of cards to be combined into a single image, and for a full deck to be condensed into just 18 unique images.

3 Stages anyone goes through when acquiring a new skill:
1. Cognitive stage – you’re internalizing the task and discovering new strategies to accomplish it more proficiently.
2. Associative stage – you’re concentrating less, making fewer major errors, and generally becoming more efficient.
3. Autonomous stage – when you figure that you’ve gotten as good as you need to get at the task and you’re basically running on autopilot.

What separates experts from the rest of us is that they tend to engage in a very directed, highly focused routine called “deliberate practice.” They develop strategies for consciously keeping out of the autonomous stage while they practice by doing 3 things: focusing on their technique, staying goal-oriented, and getting constant and immediate feedback on their performance. In other words, they force themselves to stay in the cognitive stage.

Part of the reason techniques like visual imagery and the memory palace work so well is that they enforce a degree of attention and mindfulness that is normally lacking.

Bruce Lee said “There are no limits. There are plateaus, but you must not stay there, you must go beyond them. If it kills you, it kills you.”

The art and science of memory is about developing the capacity to quickly create images that link disparate ideas. Creativity is the ability to form similar connections between disparate images and to create something new and hurl it into the future so it becomes a poem, or a building, or a dance, or a novel. Creativity is, in a sense, future memory.

Paradox: For all the memory stunts I could now perform, I was still stuck with the same old shoddy memory that misplaced car keys and cars. It was however useful that I could now memorize speeches, and the names of dozens of people at a cocktail party, and that was surely useful. While my digit span may have doubled, could it really be said that my working memory was twice as good as it has been when I started my training? I wish I could say it was. But the truth is, it wasn’t.

What I had really trained my brain to do, as much as to memorize, was to be more mindful and to pay attention to the world around me. Remembering can only happen if you decide to take notice.

Memory training is not just for the sake of performing party tricks; it’s about nurturing something profoundly and essentially human.