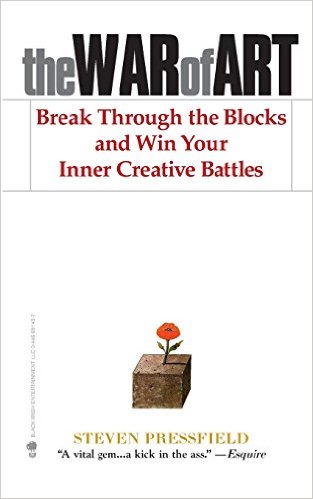 The War of Art – by Steven Pressfield

A super quick and fun read about “resistance,” the poison in your mind that stops you from achieving your goals or reaching your full potential. I think about this book anytime I want to accomplish something but I start making excuses as to why I can’t. Crush resistance to live a better life.

I have to overcome resistance.

Most of us have two lives. The life we live, and the unlived life within us. Between the two stands resistance.

Any act that rejects immediate gratification in favour of long-term growth, health, or integrity will elicit resistance.

Resistance arises from within. Resistance is the enemy within.

Rule of Thumb: The more important a call or action is to our soul’s evolution, the more Resistance we will feel toward pursing it.

Fear doesn’t go away. The battle must be fought anew every day.

The danger is greatest when the finish line is in sight.

The best and only thing that one artist can do for another is to serve as an example and an inspiration.

Never Forget: This very moment we can change our lives. There never was a moment, and never will be, when we are without the power to alter our destiny. This second, we can turn the tables on resistance. This second we can sit down and do our work.

Unalleviated, resistance mounts to a pitch that becomes unendurable. At this point vices kick in. Dope, adultery, web surfing.

We’re wired tribally, to act as part of a group.

Individuals who are realized in their own lives almost never criticize others.

The more scared we are of a work or calling, the more sure we can be that we have to do it.

The professional tackles the project that will make him stretch.

The opposite of love isn’t hate; it’s indifference.

Rationalization has its own sidekick. It’s that part of our psyche that actually believes what rationalization tells us. Its one thing to lie to ourselves. Its another thing to believe it.

Someone once asked Somerset Maugham if he wrote on a schedule or only when struck by inspiration. “I write only when inspiration strikes.” he replied. “Fortunately is strikes every morning at nine o’clock sharp.

Principle of Priority
– You must know the difference between that is urgent and what is important.
– You must do whats important first

Resistance gets us to plunge into a project with an overambitious and unrealistic timetable for its completion. It knows we cant sustain that level of intensity. We will hit the wall. We will crash.

The professional is on a mission. He will not tolerate disorder. He eliminates chaos from his world in order to banish it from his mind.

The professional knows that fear can never be overcome.

It’s better to be in the arena, getting stomped by the bull, than to be up in the stands or out in the parking lot.

You must not act reflexivly. You must govern your emotion.

The professional cannot allow the actions of others to define his reality. You must learn to recognize envy-driven criticism and to take it for what it is: the supreme compliment. The critic hates most that which he would have done himself if he had the balls.

There’s no mystery to turning pro. It’s a decision brought about by an act of will. We make up our mind to view ourselves as pros and we do it. Simple as that.

I believe that above the entire human race is one super-angel, crying Evolve! Evolve!

The Ego Believes:
– Death is real
– Time and space are real
– Every individual is different and separate from every other.
– The predominant impulse of life is self preservation
– There is no god.

The Self Believes:
– Death is an illusion
– Time and space are illusions
– All beings are one.
– The supreme emotion is love.
– God is all there is

The master fear: The fear that we will succeed.

Each person came into this world with a distinct personality at birth. We show up possessing already a highly refined and individuated soul. We’re not born with unlimited choices. We can’t be anything we want to be. We must find out who we already are and become it.

Here’s a test: Of any activity you do, ask yourself: If I were the last person on earth, would I still do it?