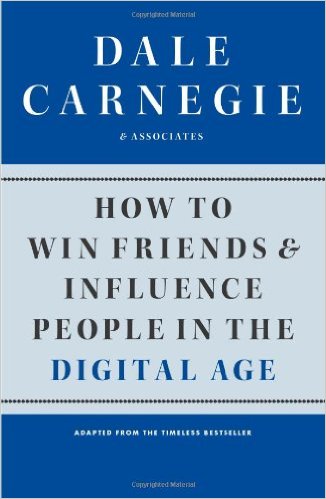 A modern take on the timeless classic. Basically a big book on how to get people to like you by how you choose interact with them. The original was what first got me interested in social psychology years ago. Although I do feel this adaptation to include communication by technology was unnecessary as the principles are the same. I would recommend the original over this one.

The following is a quick summary of the original book.

Don’t criticize, condemn or complain. Criticism is often futile and merely puts people on the defensive. Instead try to understand why people do what they do.
Give honest and sincere appreciation. If you can arouse enthusiasm in people and a sense of good will, you can begin to realize the true power of appreciation.
Arouse in the other person an eager want. Henry Ford said that “If there is any one secret of success, it lies in the ability to get the other person’s point of view and see things from that person’s angle as well as from your own.”

Part Two – Six Ways to Make People Like You

Become genuinely interested in other people. Care about them and their interests. Do things for others that require “time, energy, unselfishness and thoughtfulness.”
Smile. It’s been said that “People who smile tend to manage, teach and sell more effectively, and to raise happier children.” It’s a simple enough idea, so I wonder why so few people seem to follow it.
Be a good listener and encourage others to talk about themselves. A young boy once said to his mother, “Mom, I know you love me very much because whenever I talk to you about something you stop whatever you are doing and listen to me.” Wow, that hits home!
Make the other person feel important – and do it sincerely. William James said, “The deepest principle in human nature is the craving to be appreciated.” Help someone feel appreciated and how could they not like you?

Part Three – How to Win People to Your Way of Thinking

The only way to get the best of an argument is to avoid it. Sure, you may achieve a victory sometimes; but it will be an empty victory because you will never get your opponent’s good will.
If you are wrong, admit it quickly and emphatically. Any fool can try to defend his mistakes, but it raises one above the herd to admit one’s mistakes.
Get the other person saying “Yes, yes” at the outset…and keep your opponent, if possible, from saying “No.” Use the “Socratic method” to garner trust and agreement.
Be sympathetic with the other person’s ideas and desires. Just because they may not be consistent with your own, it doesn’t mean they are wrong and you are right. Strive to be open to others, you may learn something.

Part Four – Be a Leader: How to Change People Without Giving Offense or Rousing Resentment

Ask questions instead of giving direct orders. No one likes to take direct orders, so give people the opportunity to do things themselves.
Give the other person a fine reputation to live up to. If you want to improve a person in a certain respect, act as though that particular trait were already one of his or her outstanding characteristics.
Make the other person happy about doing the thing you suggest. Be sincere. Be empathetic and match the benefits of doing the thing you suggest to the other person’s wants.
There is so much wisdom packed into the pages of this book that it seems impossible to digest it all. However, if you take Dale Carnegie’s principles and lessons to heart, you can’t help but be more of who you want to be and accomplish more than you ever thought possible. And you’ll develop some truly meaningful relationships along the way.