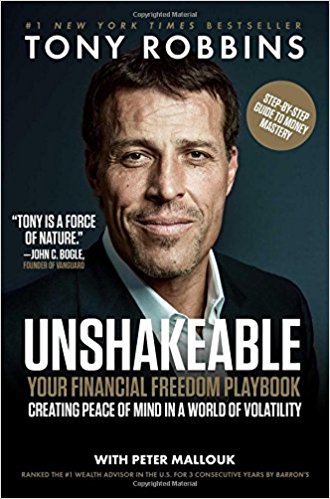 A quick but deep read into investing, and the psychology you need to adopt to be financially successful. It is basically an abridged version of his last book “MONEY: Master The Game” This book is much easier to digest and you get the core concepts in a smaller footprint. I will be recommending this book to my friends who are just starting investing so they can get into the right mindset to succeed.

“Waste no more time arguing about what a good man should be. Be one.” – Marcus Aurelius

Despite the risks, if we are to have any chance for meeting our long-term financial goals, invest we must.

First-world countries such as Switzerland, Sweden, Germany, Denmark, and Japan now have “negative” interest rates.
But people around the world now have to pay banks to accept their hard-earned savings.
Its the first time this has happened in 5000 years of banking history.

One of the greatest lessons I’ve learned from these money masters is that you don’t have to predict the future to win this game.
You have to focus on what you can control, not what you can’t.

One study showed that 96% of mutual funds failed to beat the market over a 15-year period. The result? You OVERpay for UNDERperformance.

Fees add up massively over time. If you overpay by 1% a year, it will cost you 10 years worth of retirement income.

“The key to making money in equities is not to get scared out of them.” – Peter Lynch

Our capacity for pattern recognition is also the number one skill that can empower is to achieve financial prosperity. Once you recognize the patterns in the financial markets, you can adapt to them, utilize them, and profit from them.

The most important fact of all: the biggest danger isn’t a correction or a bear market, its being OUT of the market.

One of the most fundamental rules for achieving long-term financial success is that you need to get in the market and stay in it, so you can capture all of its gains. Jack Bogle puts it perfectly: “Don’t do something! – Just stand there!”

There are bout 9500 mutual funds in America – more than double the number of publicly traded US companies! So its safe to say the mutual fund market is a tad saturated.

Buffet said he’s left instructions that, after his death, the money he leaves in trust for his wife should be invested in low-cost index funds. His explanation? “I believe the trusts long-term results from this policy will be far superior to those attained by most investors.

Warren Buffet jokes that you never want to ask a barber whether you need a haircut. Well, brokers are the barbers of the financial world. They’re trained and incentivized to sell, regardless of whether you need what they’re selling! Its not a criticism, its just a fact.

One way to make sure you hire the right adviser is to ask him or her several key questions that will help you uncover any potential conflicts and concerns that you might miss otherwise.
1. Are you a Registered Investment Advisor
2. Are you affiliated with a broker-dealer?
3. Does your firm offer proprietary mutual funds or separately managed accounts?
4. Do you or your firm receive any third part compensation for recommending particular investments?
5. Whats your philosophy when it comes to investing?

There are four major principles that nearly all great investors use to guide them in making investment decisions. I call these the Core Four. These four patterns, which I’ll explain in this chapter, can powerfully influence your ability to achieve financial freedom.

Core Principle 1: DON’T LOSE
The best investors are obsessed with avoiding losses. Why? The more money you lose, the harder it is to get back to where you started.
The most successful investors recognize that none of us can consistently predict what the future holds.

Core Principle 4: DIVERSIFICATION
There are four important ways to diversify effectively
1. Across different asset classes
2. Within asset classes.
3. Across Markets, Countries and Currencies.
4. Across time.

Ray emphasized that, by owning 15 uncorrelated investments, you can reduce your overall risk by about 80% and you’ll increase the return to risk ratio by a factor of 5. So, your return is five times greater by reducing that risk.

“I learned that courage was not the absence of fear, but the triumph over it. The brave man is not he who does not feel afraid, but he who conquers that fear.” – Nelson Mandela

If you live in fear, you’ve lost the game before it even begins. How can you achieve anything if you’re too scared to take a risk?

There are two primary ways to prepare for market turmoil. First you need the right asset allocation. Second, you need to be positioned conservatively enough (with some income set aside for a very rainy day), so that you won’t be forced to sell while stocks are down.

As I see it, 90% of surviving a bear market comes down to preparation.

Sir John Templeton’s famous remark: “The four most expensive words in investing are “This time is different””

REIT: Real Estate Investment Trust: They provide a no-hassle, low-cost way to diversify broadly, both geographically and across different types of property. For example., you can own a small slice of a REIT that investing assets such as apartment buildings, office towers, senior housing facilities, medical offices, or shopping malls. You get to benefit from any appreciation in the price of underlying property, while also receiving a healthy stream of current income.

I’ve found again and again that 80% of success is psychology and 20% in mechanics.

Mistake #1: “Seeking confirmation of your beliefs. Why the best investors welcome opinions that contradict their own.”
The truth is, it’s never wise to fall in love with an investment. As the saying goes, love is blind!
The Solution: Ask better questions and find qualified people who disagree with you.

Mistake #3: “Overconfidence. Get Real: Overestimating our abilities and out knowledge is a recipe for disaster.
The Solution: Get Real. Get Honest. You don’t know shit.

Mistake #4: “Greed, Gambling, and the quest for home runs. Its temping to swing for the fences, but victory goes to the steady survivors.”
The financial media reinforces the sense that the markets are just one giant casino -an intoxicating get rich quick scheme for speculators.
The Solution: Its a marathon, not a sprint.

Mistake #5: “Staying home. Its a big world out there – so how come most investors stay close to home?”
The Solution: Expand your horizons.

Mistake #6: “Negativity and loss aversion. Your brain wants you to be fearful in times of turmoil – don’t listen to it!
At this point, I’m guessing that your rational mind knows that market crashes are a wonderful opportunity to build long term wealth, not something to fear! But negativity bias makes it hard for the average investor to act on this knowledge.
The Solution: Preparation is key.

The first step to achieving anything you want is FOCUS. Wherever your focus goes… energy flows.
The second step is to go beyond hunger, drive and desire, and to consistently take MASSIVE ACTION. A lot of people dream big but never get started! To succeed, you need to take massive action.
The third step to achieving whatever we want is grace. I’ve been amazed to see how a deep sense of appreciation brings more and more grace to our lives.

The secret to happiness in one word: PROGRESS.

“A man is but the product of his thoughts. What he things, he becomes” – Mahatma Ghandi

In reality, the mental and emotional state in which you live is ultimately the result of where you choose to focus your thoughts.

I’m done with suffering. I’m going to live every day to the fullest and find juice in every moment, including the ones I don’t like, BECAUSE LIFE IS JUST TOO SHORT TO SUFFER.

As you know now, UNSHAKABLE isn’t just the title – it’s a way of living that can permeate every aspect of your life. Ultimately, it means freedom and peace of mind.