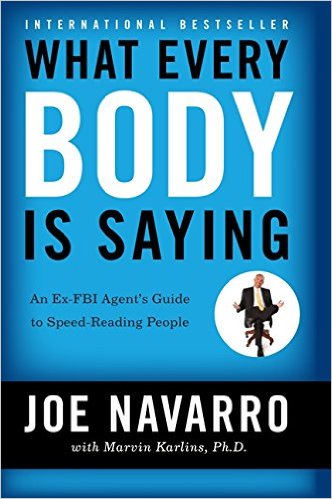 What Every BODY is Saying – by Joe Navarro

Must read from the mind of an ex-FBI detective that was able to perceive deception from criminals in interrogation by monitoring the nonverbal communication of their bodies. Navarro shares stories about how he is able to speed read people and then makes that knowledge usable in everyday life. He goes through every part of the body detailing what to look for and then decodes what each behavior could mean.

Its important to read the book because of the pictures*

“Eye-blocking” – non verbal behaviour that occurs when we feel threatened. It protects the brain from “seeing” undesirable images and to communicate our disdain towards others.

Nonverbal behaviours comprise approximately 60 to 65 percent of all interpersonal communication.

It has been well established by researchers that those who can effectively tread and interpret nonverbal communications, and mange how others perceive them, will enjoy greater success in life than individuals who lack this skill.

10 Commandments for Observing and Decoding Nonverbal Communications Successfully
1. Be a competent observer of your environment
– Concerted observation is absolutely essential to reading people and detecting their nonverbal tells successfully.
– Holmes to Watson: “You see but you do not observe”
– Becoming aware of the world around you is not a passive art.
2. Observing context is key to understanding nonverbal behaviour.
3. Learn to recognize and decode nonverbal behaviours that are universal
4. Learn to recognize and decode idiosyncratic nonverbal behaviours.
– The best predictor of future behaviour is past behaviour
5. When you interact with others, try to establish their baseline behaviours.
6. Always try to watch people for multiple tells – behaviours that occur in clusters or succession.
7. It’s important to look for changes in a person’s behaviour that can signal changes in thoughts, emotions, interest or intent.
8. Learning to detect false or misleading nonverbal signals is also critical.
9. Knowing how to distinguish between comfort and discomfort will help to focus on the most important behaviours for decoding nonverbal communications.
10. When observing others, be subtle about it.

Limbic Brain: It is the part of the brain that reacts to the world around us reflexively and instantandously, in real time, and without thought. The limic brain is considered the honest brain.

Action to distress is in 3 categories: freeze, flight, fight.
Freeze: You can observe it when people are caught bluffing or stealing, or sometimes when they are lying. When people feel threatened or exposed, they react just like our ancestors did a million years earlier; they freeze.
Flight: Blocking behaviours happen, manifest in the form of eye rubbing, or placing hands infront of the face.

People lean away from each other subconsciously when they disagree or feel uncomfortable around each other.

When the limbic brain is in a state of comfort, this mental and physiological well being is reflected in nonverbal displays of contentment and high confidence. When it is experiencing discomfort, the corresponding body language is characterized by behvaiours emblematic of stress or low confidence.

Whenever there is a limbic response, especially to a negative or threatening experience, it will be followed by what is called pacifying behaviour.
Look for pacifying behaviours in people to tell when they are not at ease or when they are reacting negatively to something done or said.
Neck touching and/or stroking is one of the most significant and frequent pacifying behaviours we use in responding to stress.
They soothe us. Men refer to touch their faces. Women prefer to touch their necks, clothing, jewlery, arms and hair.
When you see them, stop and ask yourself, “Why is this person pacifying?”

The most honest part of the body is THE FEET!

The lower limbs must be viewed as a significant part of the entire body when collecting nonverbal intelligence.

When we are happy and excited we walk as if we are floating on air. Toes pointed upward is a positive sign.
If you observe a persons feet going from being together to being spread apart, you can be fairly confident that the individual is becoming increasing unhappy.
We cross our legs in the presence of others when we are confident.
If a person is standing by herself in an elevator with one leg cross over the other, she will immediately uncross her legs and plant both feet firmly on the floor when a stranger step into an elevator.
We cross our legs in such a way so that we tilt toward the person we favour.
During high comfort social interactions, our feet and legs will mirror those of the other person we are with (isopraxis) and will remain playful. When people sit side by side, the direction of their leg crosses become significant.
If someones feel are pointed away from you while his body faces toward you, you should ask yourself why.
People interlock their feet and ankles when they are under stress.

Not only do we lean away from people who make us uncomfortable, we may also blade away (turn slightly) by degrees from that which does not appeal to us.
When you witness people protecting their torsos in real time, you can use it as an accurate indicator of discomfort on their part.
An honest and true response will cause both shoulders to rise sharply and equally. If you see only one shoulder rise they might not be committed to what they are saying.

When excited, we dont restrict our arm movement.
Ever have that sinking feeling? Its a limbic response to a negative event.
When people place their arms behind their backs, first they are saying, “I am of higher status.” Second, they are transmitting “Please don’t come near me; I am not to be touched.”
Humans dislike it when we feel unworthy of being touched.
Territory, in essence, is power. Notice how confidence or high status individuals will claim more territory with their arms than less confident, lower status persons. Real estate is equated with power and status.
The image of authority is known as arms akimbo.
As a general rule, the meek will pull in their arms; the strong, powerful, or indignant will spread them out to claim more territory.
Arm touching can generate sensuous pleasure.
When we are confident we spread out. When we are less confident we withdraw.
I feel sorry for those who are not huggers; they are missing so much in their lives.
An abrazo is a brief hug in Latin America.
One of the best ways to establish rapport with someone is to touch that person on the arm, somewhere between the elbow and the shoulder.

We communicate our ideas more effectively when we employ our hands.
Hiding your hands creates a negative impression. Keep them visible.
I have shaken hands with people who try to establish dominance the this greeting, and I have always come away with negative feelings.
Because our brains focus so much on the hands, you should pay extra attention to hand hygiene, since others will.
Putting people at ease when they are stressed is one of the best ways to insure more honest, effective, and successful interactions.
Steepling can be such a powerful purveyor of confidence and self-assurance that it is hard to challenge a person displaying such a nonverbal signal.
Thumb sticking out of the pocket is a high confidence display.
Research tells us liars tend to gestures less, touch less, move their arms and legs less than honest people.
People who touch their necks while speaking are, in fact, reflecting lower than normal confidence or are relieving stress.

From an early age we are taught by our parents not to make faces when we don’t like the food in front of us, or we are compelled to fake a smile when greeting someone we don’t like. In essence we are taught to lie with our faces, and so we become quite adept at hiding our true sentiments facially, even though they occasionally do leak out.
When we are truly relaxed and comfortable, facial muscles relax and the head will tilt to the side, exposing our most vulnerable area, the neck.
Any decrease in the size of the eyes, whether through squinting o pupilary constriction, is a form of subconscious blocking behaviour. And all blocking behavours are indicative of concern, dislike, disagreement, or the perception of a potential threat.
When people are truly pleased by what they see, not only do their pupil dilate, but they eyebrows rise (arch), widening their eye area and making their eyes look larger.
Clarity of though is often enhanced by looking away, and that is the reason we do it.
A downward gaze may demonstrate tat we are processing a sentiment or a feeling, conducting an internal dialogue, or perhaps demonstrating submissiveness.
When we exhibit a social or false smile, the lip corers stretches sideways through the use of a muscle called the risorius. When used bilaterally, these effectively pull the corners of the mouse sideways but cannot lift them upward, as is the case with a true smile.
Lovers can often be seen hovering round each other, their nostrils subtly flaring in excitement and anticipation. Most likely, lovers engage in this subconscious behaviour as they absorb each others scents of sexual attraction known as pheromones.
Anything you observe on the face should be compared with the nonverbals of the rest of the body. You need to look for clusters of behaviours.

In reality it is extremely difficult to detect deception. Most people, both laypersons and professionals are not very good at detecting lies.
Polygraphs are accurate only 60-80 percent of the time.
For humans, lying is a tool for social survival.

Individuals who are comfortable display their bodies more openly, showing more of their torsos and the insides of their arms and legs.

By mirroring another persons behaviour, we are subconsciously saying, “I am comfortable with you.”

Pacifiers and Discomfort
1. Get a clear view.
2. Expect some pacifying behaviours.
3. Expect initial nervousness.
4. Get the person with whom you’re interacting to relax first.
5. Establish a baseline.
6. Look for increased use of pacifiers.
7. Ask, pause and observe.
8. Keep the person you are interviewing focused.
9. Chatter is not truth.
10. Stress coming in and going out.
11. Isolate the cause of the stress.
12. Pacifiers say too much.

When liars attempt to fabricate an answer, their emphasis looks unnatural or is delayed; rarely do they emphasize where appropriate, or they chose to do so only on relatively unimportant matters.

Deceptive people spend time evaluating what they say and how it is being received, which is inconsistent with honest behaviour.
Lack of arm movement and lack of emphasis are suggestive of deception.
As individuals make declarative statements that are false, they will avoid touching not only other people, but objects such as a podium or table as well.
People who are being deceptive lack commitment and confidence in what they are saying.

When we are confident and comfortable, we spread out.

A person who is not comfortable, not emphasizing, and whose communication is out of synchrony is, at best, communicating poorly, or at work being deceptive.