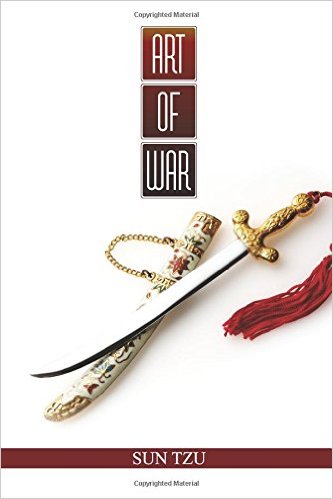 The Art of War – by Sun Tzu

Short book on war strategies of the distant past. The strategies outlined are written for warfare, but the tactics used back then can be directly related to our culture of office competition in western society.

The Art of War is governed by 5 constant factors; He who knows them will be victorious.
– The Moral Law
– Heaven
– Earth
– The Commander
– Method and Discipline

When your weapons are fulled, your ardor damped, your strength exhausted and your treasure spent, other chieftains will spring up to take advantage of your extremity.

Cleverness has never been seen associated with long delays. There is no instance of a country having benefited from prolonged warfare.

In order to kill an enemy our men must be roused to anger. There must be advantage from defeating the enemy, they soldiers must have their rewards.

The best thing of all is to take the enemy’s country whole and intact, to shatter and destroy it is not so good.

Supreme excellence consists in breaking the enemy’s resistance without fighting.

The worst policy of all is to besiege walled cities.

If you know the enemy and you know yourself, you need not fear the result of a hundred battles.

Standing on the defense indicated insufficient strength, attacking, a superabundance of strength.

There are no more than two methods of attack. Direct and indirect.

Conceal your dispositions and you will be safe from the prying of the subtlest spies.

Ponder and deliberate before you make a move.

Now a solider’s spirit is keenest in the morning; by noonday it has begun to flag; and in the evening, his mind i bent only on returning to camp.

To refrain from intercepting an enemy who’s banners are in perfect order, to refrain from attacking an army drawn up in calm and confident array: This is the art of studying circumstances.

The art of war teaches us to rely not on the likelihood of the enemy’s not coming, but on our own readiness to receive him; not in the chance of his not attacking, but rather on the fact that we have made our position unassailable.

5 Faults of a General
– Recklessness, which leads to destruction.
– Cowardice, which leads to capture.
– A hasty temper, which can be provoked by insults;
– a delicacy of honour which is sensitive to shame.
– over-solicitude for his men, which exposes him to worry and trouble.

When the enemy is close at hand and remains quiet, he is relying on the natural strength of his position. When he keeps aloof and tries to provoke a battle, he is anxious for the other side to advance.

If soldier are punished before they have grown attached to you, they will not prove submissive, and, unless submissive, then will be practically useless. Therefore soldiers must be treated with humanity, but kept under control by means of iron discipline.

The general whoa advances without coveting fame and retreats without fearing disgrace, whose only thought is to protect his country and do good service for his sovereign, is the jewel of the kingdom.

Regard your soldiers as your children, and they will follow you into the deepest valleys; look upon them as your own beloved sons, and they will stand by you even unto death.

The experienced soldier, once in motion, is never bewildered; once he has broken camp, he is never at a loss.

Rapidity is the essence or war. Take advantage of the enemy’s unreadiness.

Concentrate your energy and hoard your strength.

If they face death, there is nothing they may not achieve. Officers and men alike will put forth their uttermost strength.

Do away with superstitious doubts. Then until death itself comes, no calamity need be feared.

Its the business of a general to be quiet and this ensure secrecy; upright and just, and thus maintain order.

The general principle is, that penetrating deeply being cohesion; penetrating but a short way means dispersion.

When the outlook is bright, bring it before your solider’s eyes; but tell them nothing when the situation is gloomy.

If the enemy leaves a door open, you must rush in.

What enables a good general to strike and conquer, and achieve things beyond the reach of ordinary men, is foreknowledge.

Knowledge of the enemy’s dispositions can only be obtained from other men.

Spies are a most important element in war, because on them depends an army’s ability to move.