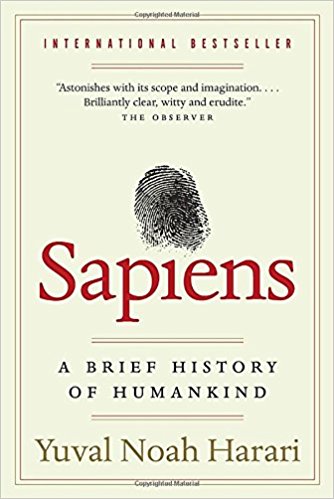 A very broad book that hits a huge amount topics on the timeline of homo sapiens; ranging from the time we shared the earth with the Neanderthals, to today when we can sequence our DNA for under $100. Its a really interesting read and Harari makes it fun to learn about the history of how humans came to be and grow. Sapiens makes reading about history GREAT again! Would recommend this book to any type of person looking for a cool nonfiction read.

The following book notes are borrowed from: jamesclear.com/book-summaries/sapiens

Human history has been shaped by three major revolutions: the Cognitive Revolution (70,000 years ago), the Agricultural Revolution (10,000 years ago), and the Scientific Revolution (500 years ago). These revolutions have empowered humans to do something no other form of life has done, which is to create and connect around ideas that do not physically exist (think religion, capitalism, and politics). These shared “myths” have enabled humans to take over the globe and have put humankind on the verge of overcoming the forces of natural selection.

This is my book summary of Sapiens by Yuval Noah Harari. My notes are informal and often contain quotes from the book as well as my own thoughts. This summary also includes key lessons and important passages from the book.