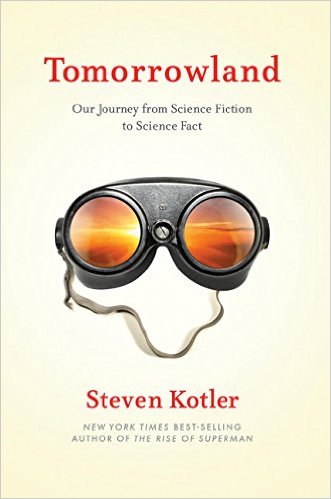 Stories about all different kinds of cutting edge technologies that will be impacting our lives in the future. This is a “glass half full” approach on the future, with technology paving the path to a better life. This book will change the minds of all the people who are pessimistic about the future through real life case studies and inventions aimed at a better tomorrow.

Introduction—The Future Is Here
When you strip everything else away, technology is nothing more than the promise of an easier tomorrow. It’s the promise of hope. And how do you stop hope?

Chapter One: The World’s First Bionic Man
Tucked inside the tale of the world’s first bionic man is the larger question of who invents the future. Definitely not the mainstream. Almost always, these radical innovators are mavericks and misfits and this tells us something important about what it takes to dream up tomorrow.

Chapter Two: The Science of Mind Uploading
For centuries, our spiritual traditions have used the threat of the hereafter to steer behavior. So what happens to morality when immortality becomes a possibility?

Chapter Three: The Biology of Spirituality
Today, a bevy of mystical experiences are understood as the product of measurable biology. The hard science has been done, the disruptive tech is what comes next. Pretty soon, the direct experience of the numinous is going to be available via video game.

Chapter Four: The Future of Evolution
We have massively accelerated evolution and the results are fracturing our species. We are no longer human beings, we are now human becomings.

Chapter Five: The World’s First Artificial Vision Implant
Day One: I met a blind man. Day Three: He could see well enough to drive a car around a parking lot.

Chapter Six: The World’s First Terraforming Project
Our attempt to rebuild the Everglades marks our first try at terraforming, the once sci-fi term for the sculpting of worlds, and both a testament to the incredible scale at which our species can now play and, perhaps, the incredible hubris it takes to play at this scale.

Chapter Seven: The Arrival of Flying Cars
Sure, this wasn’t the first time in history someone told their buddy that they’d figured out how to build a flying car. After all, when it comes to our sci-fi dreams, what’s dreamier than a flying car? But here’s the thing: this flying car—which, albeit, is actually a flying motorcycle—really flies.

Chapter Eight: The Possibilities of Nuclear Energy
Nuclear fusion is gods’ fire, both the fuel that powers the stars and the all-star light in “let there be light.” Nuclear fission, meanwhile, is our attempt to steal fire from the gods and a story so muddled that there are few left among us with an unbiased opinion—which is problematic since, well, the future of our species might depend on those opinions.

Chapter Nine: The Future of Sport
Technically, this is the tale of skydiver Felix Baumgartner’s attempt to break a world record, except this record is actually an off-world record—a demonstration that our urge to play, interwoven with our need to push limits, has finally left the planet.

Chapter Twelve: The Radical World of Psychedelic Medicine
Discussions of future technology often include the “human factor”—how a certain tech will cure disease or end poverty or some other glistening proclamation—but that’s empathy at a distance, not compassion on the ground. This story is the inverse. It’s an honest look at the real human factor: fragile, brave, and—as is often the case—in desperate need of compassion.

Chapter Thirteen: The Troubled Science of Life Extension
The quest for life extension has led to one of the greatest misinformation campaigns in history, a stealth war of propaganda and politics that has cost the lives of millions. In other words, there’s a dark side to Tomorrowland—and it’s got quite a body count.

Chapter Fourteen: The Politics of Stem Cells
The central theme of this book is the transformation of sci-fi into sci-fact. This story is a view from the trenches—a hard look at all the nonscientific forces that can turn such transformation into blood sport.

Chapter Fifteen: The Consequences of Playing God
Synthetic biology gives us the power to create life from scratch, it puts the power of the gods into the hands of mortals—so, like, what could go wrong?

Chapter Sixteen: The Future of Birth
He started out as a bagman for the mob, he ended up becoming the most powerful man in the fertility industry—that is, the person on this planet with the most influence over the future of childbirth. Meet Cappy Rothman, the God of Sperm.